Climb to the Top with the National Multiple Sclerosis Society 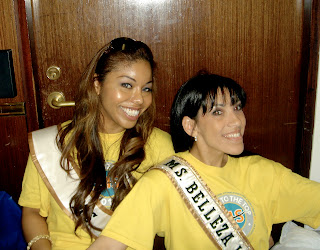 On February 27, 2011 I got up out of the most comfortable down bed I have slept in over at W Downtown in NYC in wee hours of the morning.  What time exactly? Well Sandra, Ms. Belleza Latina International 2011 and I were supposed to get up around 3 am but somehow we managed to ignore both of our cell phone alarms ringing, had last minute negotiations with each other on what exactly our call time was and finally leaped up at 4:30am in full panic mode.  With a flurry of clothes flying, flat irons pressing and applying eyelashes in 1 minute flat, we made it to the event in record time.  We meet Sasha the volunteer manager of the National Multiple Sclerosis Society, Southern New York Chapter, who leads us to our first volunteer station – the food (yes we are jumping up and down with joy).  One Starbucks later and I believe we are feeling human again.  The next hour or so we get to know two of the sweetest ladies at this volunteer station, and of course the fact that there were two cute Muscle Milk guys directly across from me did not hurt at all! I never did get to give them my phone number (darn).
I am simply amazed at the amount of people at the event who were up this early (over 1,000), and how well organized it was.  Among the first teams to go up the 66 flights of stairs at the Top of the Rock was NYFD who climbed with all of their equipment on!  Our next station was on the 43rd floor, which was the second (and last) rest stop where we joined a wonderful group of volunteers to cheer the climbers on and rehydrate them before they reached the top.  This was the best part, seeing the actual people climbing.  Some too tired to wave and gave us a grunt as they passed by, entire families climbing (including children), climbers affected with Multiple Sclerosis (MS) and also those climbing for someone they knew affected by this disease which they honored by writing their names on their t-shirt tags.
Multiple sclerosis is an autoimmune disease in which the myelin sheath covering your nerves has been compromised, interfering with the signals that your brain sends out to the rest of your body.  It is difficult to diagnose and there is no cure.  For more information on MS, including finding your local chapter, support groups or to make a donation visit: http://www.nationalmssociety.org 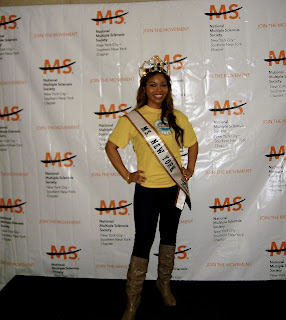 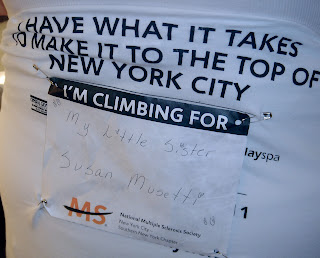 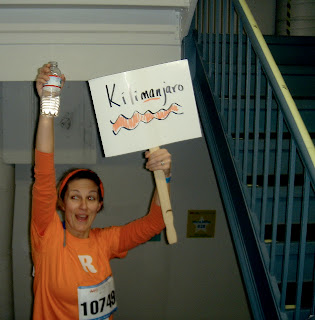