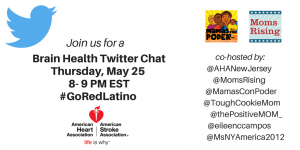 I have had the pleasure of participating and co-hosting several #GoRedLatino twitter parties the last few years, and each time I can honestly say that I have learned something alongside many of you, and have met so many wonderful people and experts online along the way. This topic peaked my interest from the moment it was presented to me. While we have discussed several different heart conditions and heart-related topics in the past, this is the first time we will be discussing the possible links between brain health and heart disease.

I usually read several articles sent to me by the American Heart Association, and then look up and do my own due diligence and read several research papers as well to get a grasp on the topic at hand. I can thank my professors from graduate school for beating into me the proper way to look for, and evaluate a research study so that I can present the best evidence that we have so far on the topic at hand. So how is the brain linked to your heart health?  What factors put you at a greater risk for Alzheimer’s, dementia and other sleep-related disorders later in life? How does sleep (or lack thereof) increase your risk as well? We’ll be answering all of these questions and more this Thursday on twitter. To join the conversation all you have to do is follow the #GoRedLatino hashtag. I’ll be giving away a beautiful ceramic bowl set and Macy’s gift card too!

Official Rules
NO PURCHASE NECESSARY TO ENTER OR WIN. A PURCHASE WILL NOT INCREASE YOUR CHANCE OF WINNING.
DATES OF SWEEPSTAKES: The “Go Red LATINO” (the “Sweepstakes”) begins at 8:00 p.m. Eastern Time (“ET”) and ends at 9:00 p.m. ET on May 25, 2017 (the “Sweepstakes Period”).

ELIGIBILITY: The Sweepstakes is open to legal U.S. residents residing in the United States and the District of Columbia, who are at least eighteen (18) years of age or older at the time of entry (the “Entrant”).
TO ENTER: To enter via Twitter®, join the Twitter® party by using hashtag #GoRedLATINO (the “Hashtag”) in order to receive one (1) entry into the Sweepstakes. Entrant will receive one (1) entry for sending a tweet during the Sweepstakes Period inclusive of the Hashtag Account (the “Entry”). Limit of one (1) Entry per Entrant during the Sweepstakes Period. Entrant’s Twitter® account must be set to “public” in order to receive one (1) Entry in to the Sweepstakes. If the Entrant’s account is not set to “public”, the Sponsor may not be able to view the Entry, and the Entry will not be eligible to win.
This Sweepstakes is in no way sponsored, endorsed or administered by, or associated with Twitter®. Entrants understand that the information being provided at point of entry is being provided to the Sponsor solely, and not to Twitter®.
WINNING: There will be two (2) random drawings held on or about May 25, 2017. For the drawing, two (2) prize winners (each, a “Prize Winner”) will be selected at random from among all eligible entries received during the Sweepstakes Period. Odds of being selected as a Prize Winner depend upon the total number of eligible entries received during the Sweepstakes Period. The random drawing will be conducted by Helen Troncoso, whose decision is based upon sole discretion and interpretation of these Official Rules and are final and binding in all respects.
NOTIFICATION: The potential Prize Winners will be notified by the Helen Troncoso within five (5) business days of the random drawing (the “Notification”). Notifications will be sent via Twitter® direct message to each potential Prize Winner. Upon Notification, potential Prize Winners will be required to submit via email to Sponsor their complete contact information (including his/her first name, last name, address, city, state, zip code, and date of birth) for Sponsor to verify eligibility and ship the respective Prize (as defined in the “Prizes” section below). Sponsor will make two (2) attempts to reach potential Prize Winners via the Notification. In the event the Sponsor cannot reach a potential Prize Winner via the Notification after two (2) attempts have been made, or if it is determined by Sponsor, in its sole discretion, that a potential Prize Winner is not eligible in accordance with these Official Rules, an alternate Prize Winner will be selected at random from among all remaining non-winning eligible entries received during the Sweepstakes Period. In such case, the alternate Prize Winner will be notified as outlined above. The Prize Winners will each receive their respective Prize (defined in the “Prizes” section below) within six (6) to eight (8) weeks from the date in which the verification via the Notification is complete.

WINNER’S LIST/OFFICIAL RULES REQUEST: For the name of the Prize Winners or a copy of these Official Rules, please submit an email no later than June 25, 2017 to [email protected] (please specify “Winners List” or “Rules Request” on the subject line of the email).
SPONSOR: Helen Troncoso
This Sweepstakes is in no way sponsored, endorsed or administered by, or associated with Twitter®.
Twitter® is a registered trademark of Twitter, Inc.